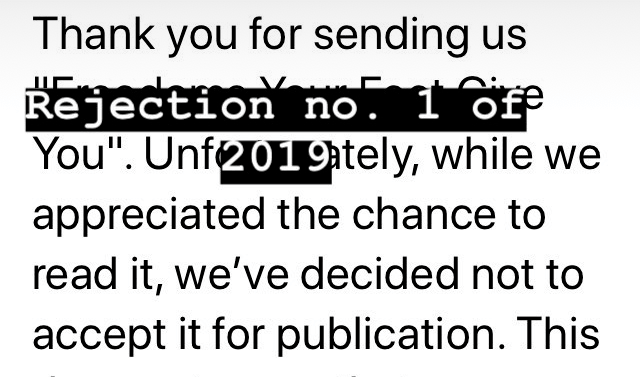 As you all know, or maybe you don’t, I’ve been writing a decent amount (for me) of short fiction lately. I think this is mostly me trying to explore a medium that doesn’t require a months-long commitment to a single world but still allows me to explore imagery and concepts that catch my fancy. I’ve never been what you would call an avid short story reader (or writer, for that matter) but recently I have been reading a lot of these tales, as evidenced by the roundups I do at the end of the year. There’s some beautiful work out there, some phenomenal writers that are working in this medium, and stretching myself in this direction has very much helped me grow as a writer.

If you’ve been following my rejections stories on Instagram, you know that, despite my feelings of growth, I’ve not been getting many acceptances. I’m led to believe this is a pretty common thing, and I’m going to talk about why that is, along with some industry trends, in this post. I’m sharing this information because a lot of it is sort of new to me as a writer and because it seems to be a point of increasing tension in the market.

Let’s start with rejections, and trace our reflections from there. Elizabeth Bear offered the above newsletter this week. She had some valuable things to say to aspiring writers. The biggest takeaway was essentially this: you may not be doing anything wrong.

There’s more to unpack from Bear’s essay of course, and I will likely return to this idea in future posts, but I wanted to share that particular takeaway as an entry point to the rest of this conversation about the state of the short story market, because I think it provides a solid grounding point for writers who are, like me, in that intermediate period where you are putting words down and they make sense and there’s a story there that really feels like it should be successful but it just…doesn’t go anywhere. Bear talks about the fact that not doing anything wrong doesn’t necessarily mean you are doing something right, something exceptional, and yes, that jives. But I think it jives for me because I’m also aware of just how stiff the competition is.

We received 1,022 submissions and accepted 26, an acceptance rate of about 2.5 percent. This is likely a lot higher than our acceptance rate will be in future reading periods

Take, for example, this report from Fireside Fiction back in the fall of 2017. 2.5 percent is a pretty low margin of acceptances. Even if you say that half of the people in the submissions pile are just not cutting it – doing something wrong – that still just means you’re competing against 500 people, not 1,000. And Fireside states in this article that they think this acceptance rate is high.

Scrolling through Submissions Grinder and other sites, I’ve found similar or lower acceptance rates when I can find data at all. A lot of that data relies on writers using the tracking data, so accuracy is fluid. But I think it’s reasonable to use two percent as an optimistic benchmark for acceptances in most professional markets. Which is more steep than acceptance rates to most graduate programs, to give context. You must be exceptional in this field to succeed, and that is likely not going to get better going forward.

A little over a month ago I stumbled on this thread and posted some reflections on it in my Instagram stories. There’s a broader conversation going on right now about magazines and markets, many of which run at a loss or run as not-for-profit businesses. Short story markets can therefore be read as a labor of love, primarily (though I’m sure there are some exceptions). As markets close, the industry becomes even more competitive. And markets have closed this year. It’s fair to say that acceptance rates for an individual market will be affected by these broader market changes. More writers will flock to a more concentrated selection of venues to showcase their work.

This year we saw some of that market correction with the closure of a few beloved markets. It’s something I intend to talk about in next year’s introduction and, fair warning, I don’t think it’s over yet. In this year’s introduction, I observed that the shortage of paying readers still exists, but also that we have a bigger problem: we’ve devalued short fiction. As someone who publishes short fiction for free online, I fully acknowledge my complicity in this problem.

I’m not sure that I personally have a lot of takeaways from this for writers, but for readers, I think there’s an important lesson here. If you love a market, support it. Keep it afloat, so that it can continue to read the authors who bring you the content that you crave.

This is just one chapter in the long history of the written word. I don’t think short stories are dying – the opposite. But these trends are definitely something to keep an eye on for writers and those interested in getting into the field of publishing through this avenue.