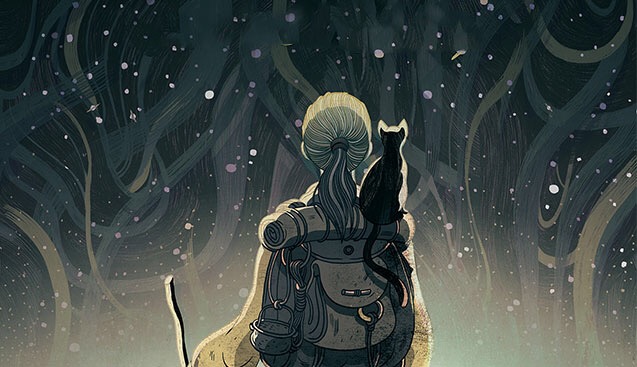 It’s that time of year again! December is working towards a close, and it’s time to go over what I’ve read and tell you all about it in one dump post! This year I’ve picked five short stories, three novellas, and five novels, since I’ve been reading more widely. These weren’t necessarily published this year, just read this year. 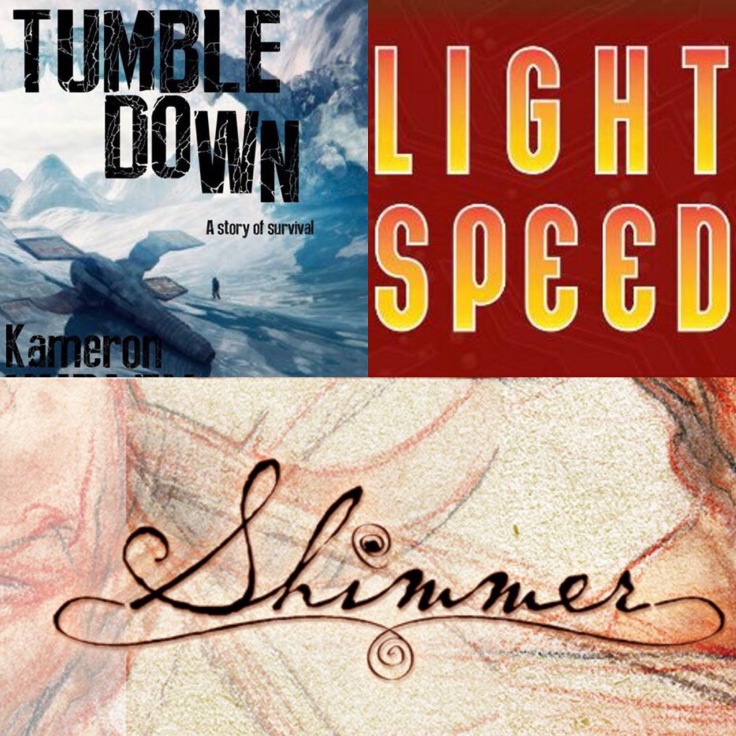 I read so many short stories this year. In the end, I decided to pick five that I loved a lot and would love for you to read, too. They are:

Published in Shimmer Magazine, which does some delightfully surreal pieces, this story is short, cerebral, and heart-breaking. A meditation on the sharply bittersweet nature of love, which is also the nature of loss. Read it, weep.

And You Shall Know Her by Her Trail of Dead, by Brooke Bolander

This story is gritty-lovely, with some gender bending that I greatly appreciated. If you’re into Matrix-style crime thrillers, women crushing it, and booze, I recommend.

The Jaws that Bite, the Claws that Catch, by Seanan McGuire

I had two stories by Seanan on my shortlist here, but I ended up with this one because Alice in Wonderland is best, and also because I want to be a Jabberwock when I grow up. For a hopeful story about who the real monsters are, look no farther.

This story was published on Kameron Hurley’s Patreon. If you’re not subscribed to that, you should be. It was delicious, carrying all of Hurley’s trademark violence and rigorous world-building in a tiny, edible package. Also the main character is a super badass disabled woman so read it if for no other reason than that.

The Key to Saint Medusa’s, by Kat Howard

So screwed up thing about my childhood – when I was little, my parents got my brother and I each a folk story on tape. My brother got Hans Christian Anderson’s “Tinderbox,” the story of a soldier who is kind of a jerk but gets a princess and a castle and a happy ever after. I got “Bluebeard.” If you aren’t familiar, that’s a story about a girl who gets married off to a very rich man who, spoiler warning, murders all of his wives. And they wonder why I turned out to be a feminist. Anyway, check out this Bluebeard re-imagining. I imagine you’ll appreciate it if, like me, you’re the curious kind of woman.

Special mention: At the Mouth of the River of Bees. I couldn’t pick one story from this collection, because they were without exception amazing. Also “The Dragon’s Tears” by Aliette de Bodard got beat out last minute by “TumbleDown,” but I still love it so check it out.

I only picked three of these because I don’t read a lot of novellas. I enjoy them immensely when I get to them, though. I would recommend these three novellas at the expense of every other item on these lists, so if you’re questioning where to start, here is a good idea. 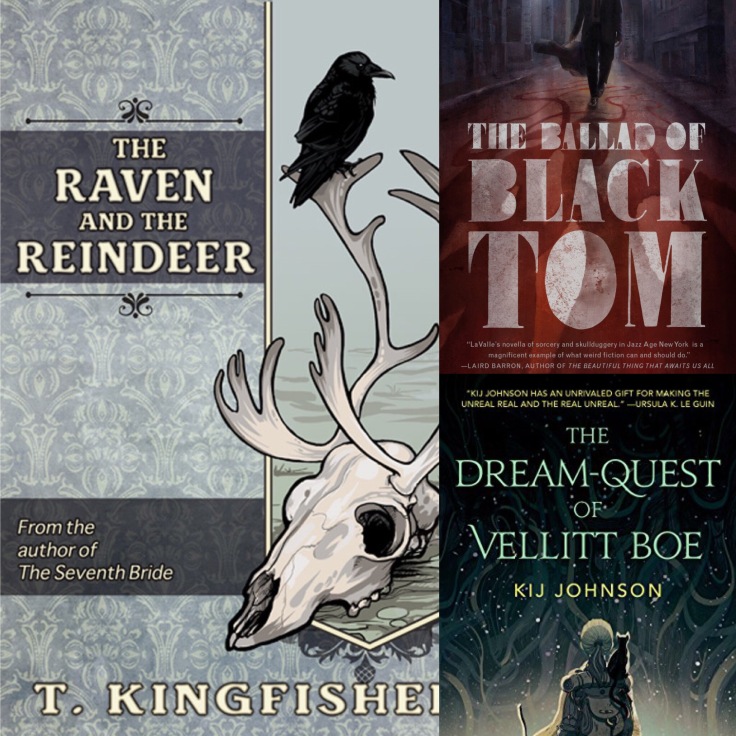 The Ballad of Black Tom, by Victor LaValle

I wrote a whole blog post about this novella, with spoilers. Read the novella, read the blog post, feel amazing.

The Dream-Quest of Vellitt Boe, by Kij Johnson

Kij Johnson also wrote At the Mouth of the River of Bees, if short stories are more your speed. This was a Lovecraftian work of love, with awesome social critique. Very similar to The Ballad of Black Tom in that way, in fact. I’m detecting a pattern here….

The Raven and the Reindeer, by T. Kingfisher

I’m not going to lie, this is probably my favorite thing in this post. This novella is wonderful, absolutely so. It’s the re-imagining of The Snow Queen I would have liked to see go to film in place of Frozen. Fittingly, it is nothing like that movie. Yes, there is a quest, and a queen made of ice. But true to the original story, the quest is about a girl going to find a boy and save him. Unlike the original story, it’s very debatable as to if this boy deserves saving. The research into the underlying culture and mythology were rad, so if you are fans of fairytales, organic magical systems, and talking birds, I recommend. Also the romance in this book is one of my favorites I’ve read recently.

Okay, let the drumroll commence. This is what you have probably been reading for. In fact, some of you probably scrolled right to the novels. I don’t blame you. This is my predominant medium of consuming literature as well. So let’s hit it.

In no particular order, my favorite books from 2016 are:

The Obelisk Gate, by N.K. Jemisin

It’s perhaps no surprise to you that this book makes the list. Sequel to The Fifth Season, which made my best of list last year and also won a Nebula, this book was a natural for me to read this year. It came out in August, and it was not a disappointment. I had no idea how the author was going to write a sequel given the way the first book was set up, but she surprised me in a very good way. Jemisin is pushing boundaries in fantasy convention, and doing it well.

The Water Knife, by Paolo Bacigalupi

So I mentioned on Twitter recently that I have a special place in my heart for bilingual books. The Water Knife, set in Phoenix in the near future, is one of those books. It also happens to be set in the city I was born in, and where some of our extended family still live. The blood of the covenant is thicker than the water of the womb in this case, as my extended family is predominantly Latina and of no blood relation. They are near and dear to my heart, though, and Phoenix is part of me. Reading this book was insanely hard because of that. It’s not a happy book. It’s a pretty damn scary book, actually. But it’s beautifully written, believable, and worth the damn read. Also everyone I love on the west coast definitely dies in this near-future scenario, so if I could enjoy it and admire it despite that you are probably going to be fine, dear reader.

On the list of books that made me cry but are just awesomely researched and written, I have to add this one. Set in World War I, this book is a solid piece of literature which incorporates a very interesting magic system (as Kowal is wont to do) overlaid with dense and historically accurate world-building that nonetheless treats women and minorities as people. That’s right, folks, if you like historical fiction but dislike the bad taste it often leaves in your mouth in regards to representation, I have not one, but two recommendations for you this year! Really you can read any of Kowal’s historical fantasy works and trust that this is the case.

Moving further into the lighter end of things, I offer this lovely novel. It is technically a standalone, in that you don’t really need to read Graceling, the first book in this series, to enjoy it. I would recommend reading Graceling, however, though I did not enjoy it nearly as much as I enjoyed Fire. It’s one of those book that made me cry with joy and with the feeling of being understood. It has an innocence that the narrative of the first two novels on this short list lack, which is really refreshing sometimes, honestly.

Ya’ll had to suspect I was going to include this one, didn’t you? It’s one of my favorite books I’ve read in an age, despite the many people who argue that it isn’t really a zombie book. It is a zombie book, and it is a hella smart one. Grant did her research on this book, guys, and it shows. She also displays her customary acutely real portrayal of human nature and its complexities. Mira Grant, for those who don’t know, is Seanan McGuire’s pseudonym for horror and mad science, so expect a little less of her general complicated but generally happy endings and a little more of the grisly destruction.

Have you read one of these? What were your favorite stories this year? Let me know in the comments!