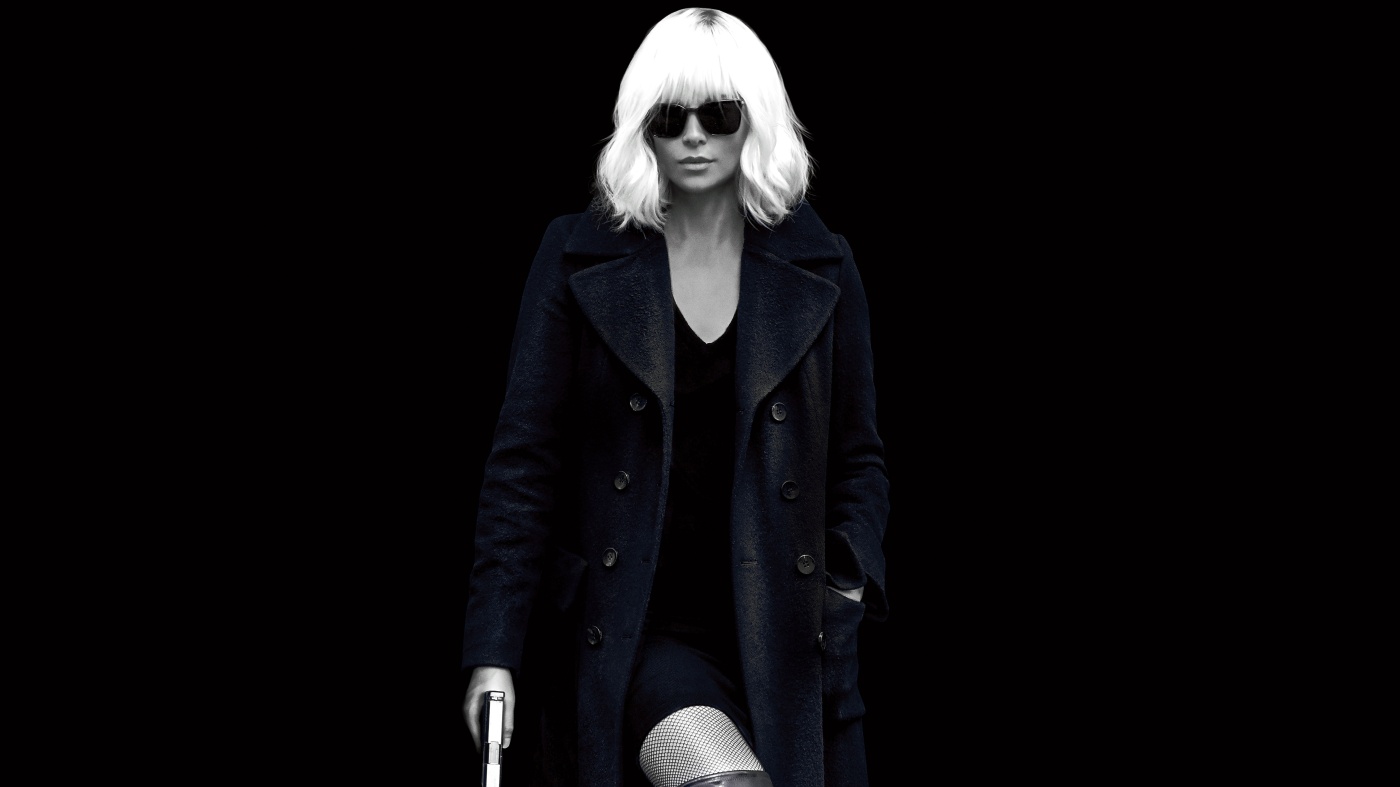 So PSA, I loved this movie.

I’ve seen some discussion of the problematic aspects of this film, and we’ll get to those because I want to unpack them. But I want to start by focusing on the positives. I had been waiting to see this movie for two weeks when I finally made it into the theater high on chocolate cake and the newest influx of birthday books. From the opening scenes, it did not disappoint. I was able to completely lose myself in this film, and that hasn’t happened to me in a long time.

For the most part, spoilers are going to come in the critique section. I’ll put a warning, so read away for the spoiler-free bits of glory.

From the opening scene of Atomic Blonde, I was hooked. No, I’m not talking about the part where the guy gets chased down and shot in the head, though the framing of that shot was unfairly beautiful. Actually, all of the movie was unfairly beautiful, a contrast to the gritty, high stakes plot and grungy setting. Shots alternate between glittering 1980s excess and austere Soviet spaces which reek of industrialism – bare concrete, geometric designs, poor lighting. There is so much neon in this movie – and spraypaint, and boom boxes, and cassette tapes. Do you also have nostalgic memories of growing up in the late 80s and early 90s? Do you want those memories to be turned into a spy novel where no one is ever good – basically replicating the 80s aesthetic? This movie is for you.* 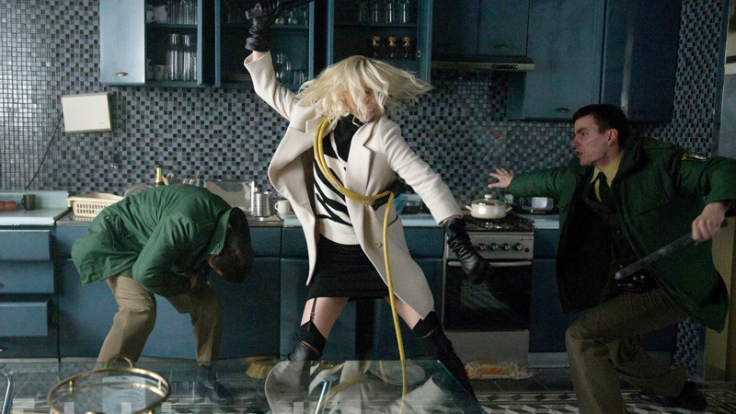 One of the things that was the most inspiring for me about this movie was not the dedicated femme fatale performance of Charlize Theron, though that was amazing. Nor was it the bitingly lovely and hardcore choreography of the fight scenes, though I was totally down with that. Nor was it, even, the way that the characters actually got hurt and had to live with those hurts and compensate for them. That was all awesome, but that was not the best thing. No, the best thing was how this movie brought the dramas of the Cold War into my timeline.

“What do you mean?” I hear you asking. Well, friends, I’m going to date myself here and admit that I was born the year before the Wall came down. Yet, as a child, I was always taught that the Cold War was something so far away. I think we have a habits of amnesia in this country, of distancing ourselves from very real upsets that we probably, even if unknowingly, lived through. It’s something I’ve seen a lot of people my age struggle with. We think of the Cold War as an artifact of the 50s, maybe the 60s. It certainly doesn’t affect us.

The events of Atomic Blonde may be fictional (I hope they are fictional) but nonetheless the story sheds light in a very immediate way on a relationship and time period that often feels like ancient history. I am totally here for more near-historical dramas, action movies, and political thrillers constructed with such attention to detail.

And now, on to the spoilers.

There were two major issues with Atomic Blonde that bear discussing. Three, really. First, the movie was pretty white. I’m not savvy on a lot of the migration patterns of the late 80s in Berlin, so I can’t say that I can critique it fairly, but it’s worth noting. I hope that we can see something as original, fast-paced, and interesting as Atomic Blonde that also manages to incorporate POC in the future.

Second, this movie was pretty back and forth on the male gaze issue. There were scenes that were framed well in this regard – I particularly like how Lorraine beat that one guy up with her shoe, this amused me incredibly. Obviously she also spent a lot of the movie bruised, bleeding, and generally doing gross stuff with little regard for what others thought of that except as to how it affected her ability to get what she wanted. But there were numerous scenes of lingerie, and of sex, which were beautifully shot and often relevant to the plot, but which were maybe not so relevant as to be required. With the exception of two, these did not bother me. Which leads me to the biggest issue with the movie, and the one with the spoilers. Really, bail out now if you want to form your own opinions.

They killed Delphine. And really, her whole character was somewhat problematic.

One of the things that becomes swiftly apparent when one takes a step back is how few women play key roles in this film. Lorraine is interviewed by two male handlers, while another one acts creepy behind a glass. Her primary target is a man, though at least his wife and child make a cameo. Her intelligence sources that she gets to doctor passports and generally act as support staff are men. Her opposite on the ground, Percival, is very much a man and plays to numerous stereotypes of the sexist and over-sexualized male. The Russians are all men, unsurprisingly. Everyone she fights at any point is a man.

Enter into this the naive French spy, Delphine Lasalle, named for Delphi, home of the god of poets. She is lovely, and in over her head, and instantly becomes Lorraine’s love interest. She does very little to propel the plot forward, though at least she is a well-rounded character. Overall, I have very few issues with her character, because of this, and because her relationship with Lorraine is very obviously played as more than a one night stand.

The way she is killed, however, is very problematic.

Delphine is a spy, and has presumably been trained in hand-to-hand combat. She recklessly calls Percival, and tips him off, and it is very obvious that she is going to die. But the fact that she dies in her lingerie being strangled is particularly upsetting, since women, and especially LGBTQ women, are so often sexualized and then brutalized on screen. It also isn’t clear why Percival feels that he needs to kill Delphine, or what he hopes to accomplish by that (though perhaps I would have different feelings on a rewatch, at the time it came across as a bit of cruelty perpetuated towards Lorraine, and having nothing to do with Delphine’s own actions), or why he uses such a personal method when he is going up against another agent.**

Delphine does manage to seriously injure Percival, and to pass on some vital information to Lorraine before she dies. All of that could have been accomplished fully clothed, however. I personally wouldn’t wear my nice nighties to play with darkroom chemicals, but maybe that particular element of practicality is too much for a movie that otherwise stuck pretty close to accuracy. More likely, it was titillating, which is a disturbing bit of commentary on the creative team.

In closing, Atomic Blonde was still one of my favorite things I’ve seen this year. We can love something and be aware that it has issues, and I’ve attempted to do both in this review. If you’ve made it this far, please do go see it, but be warned that it is violent, and that Delphine’s death is particularly upsetting.

*I have to say that I saw that terrible trailer for Ready Player One right before the movie started and I was so frustrated. Mostly because the kid is talking about all of his heroes being from the 80s and somehow it turns into slapdash, plot-free CGI wasteland. But I digress.

**I would have gone for sniping, or something else not close grappling on her own turf. Seriously, if she had been able to get her hand on the gun, Percival would have been dead, and it was a very close thing.