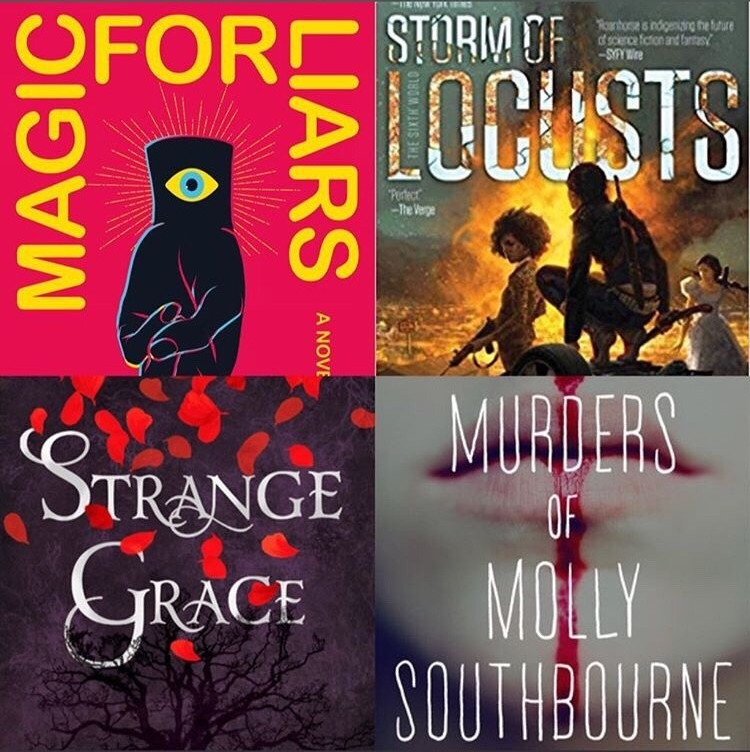 I read a bunch of books over vacation, and I thought I would go through and give a brief review of each! Before I left, I put a story up on Instagram with my four vacation reads I’d picked out and why I was excited about them. Let’s see how they held up.

So I started with Magic for Liars, which was up there on my most anticipated books of 2019. This one didn’t quite do it for me, sadly. While I enjoyed the world and the writing, I felt sort of depressed at the end of it, which isn’t what I was hoping for. If you’re fine with endings that leave you mostly sad and maybe a little angry and listless, as I know some readers are, this may be a book for you. I’d recommend it for fans of Borderline, which also was an urban fantasy book that didn’t hit for me but which a lot of people I know enjoyed. People have also compared it to The Magicians, which seems like a fair comparison after reading. I haven’t read Grossman’s work, but I’ve heard enough about it (how could you not?) that it seems to jive with the general themes here.

I really enjoyed this book, and I hope we get a few more stories in this world. One thing that I think will be interesting will be to see how the author ups the stakes in future novels – the first book was a very personal, intimate conflict, even if gods were involved. The second one has left the main character in a very good place emotionally. But as the epilogue indicates, there’s a lot more coming down the pike. I can’t wait to see how this conflict is kept fresh in successive installments, and how the main character continues to grow.

As a novella, this book was unsurprisingly short. One of the things I’ve been running into with novellas is that often it seems like there is really enough there for a book, but it just hasn’t been expanded on. I felt that way about this story – the ending didn’t tie things up neatly enough for me to not feel just a little cheated when I got to it. The author used an interesting conceit to create the narrative structure, but I think it diluted some of the emotional weight that could have been there. That said, the concept is interesting and I’ll likely read the next installment sometime when I need a short read.

So this book did not do what I thought it was going to do.

Arguably, Strange Grace was the most interesting fictional book I read on vacation. I also read it last of all the books. Based off of the cover copy, I really thought there was going to be an actual devil somewhere, in the Christian sense. But there wasn’t. The term devil was really more of a commentary on paganism and the way it was reframed. So going into the book that was a bit disorienting, but not an unpleasant surprise.

I really enjoyed this story and some of the takeaways from it. I also loved that the main characters were all apparently pansexual (I would say bisexual, but it felt a little more loose than being attracted to stark gender binary or even being attracted to people outside of their personalities in some ways, so I think pansexual fits the bill better. That said, no one describes themselves with these words, so I think either could fit depending on how you define them.) and that the central romantic conflict never jettisoned the possibility of a poly relationship as a possible conclusion. I felt very comfortable in this world in some ways, though I’m not sure that I felt the resolution fully tied up the novel. All in all, it wasn’t my favorite book by the author, but it was a beautiful one and I would definitely recommend it.

That’s it! I read some nonfiction, too, but I think that’s a separate post. Please go out and read these books and support these authors!