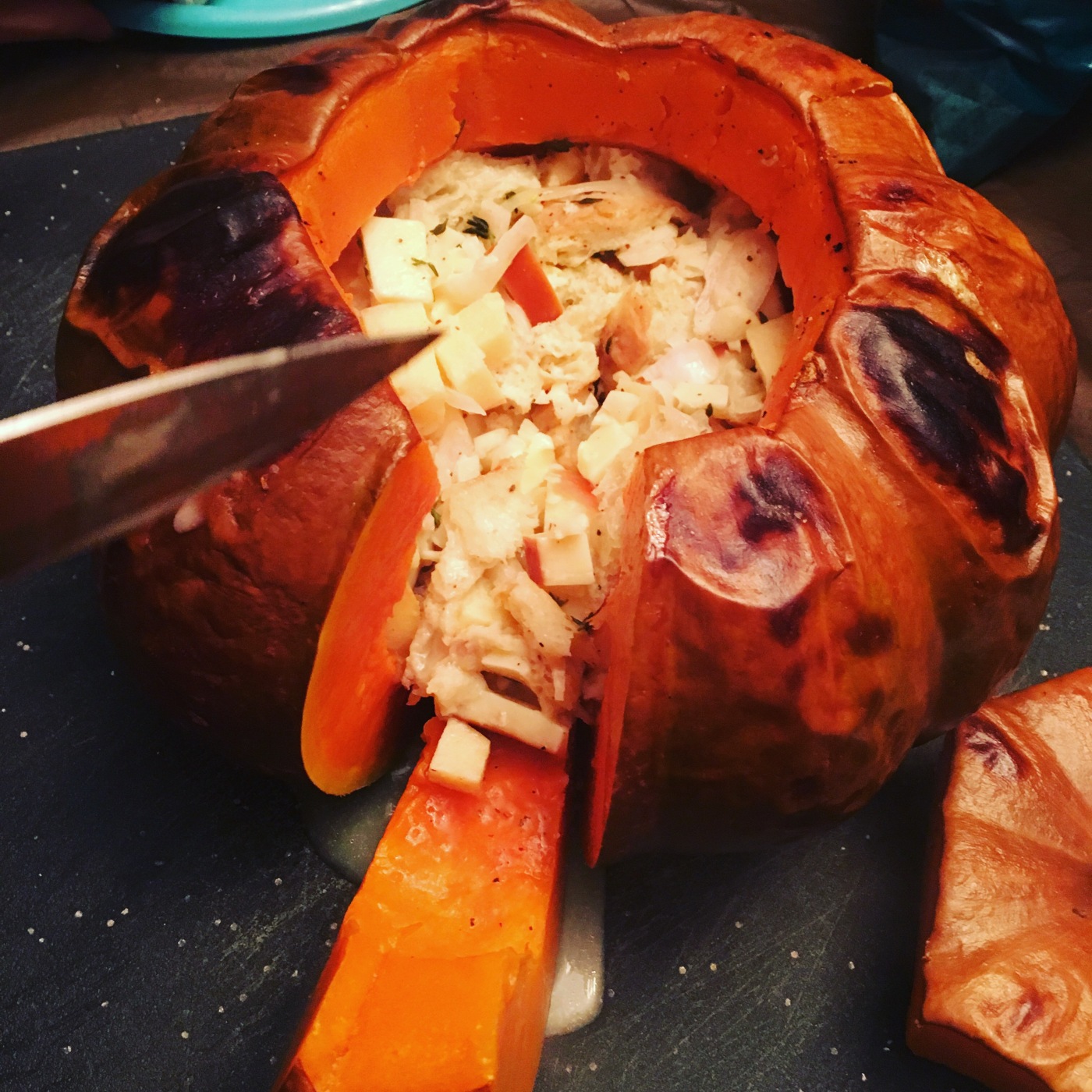 I promised you a Thanksgiving post so here we are!

My friends and I got together last Sunday to make some scrumptious things, as we do every year, and here is the menu list, with occasional pictures. Plus what I made for my family’s Thanksgiving! Recipe links, discussion of adaptations, and general cookery follow. Feel free to drool.

I found this recipe… I don’t even remember where, really. I am a recipe hoarder. Anyway, it’s really not that hard. I don’t have a stand mixer so I just hand-paddled mine, which took a while but is good exercise. Make it ahead, buy a box of crackers, and you’re golden. I made this to take to my Mom’s house, and used the pumpkin seeds from the stuffed pumpkin recipe below to roll it in.

I also made a salad to take, since that was requested. Since I’m lazy we’re not going to even talk about the salad today. It was there, I ate it. Yay! 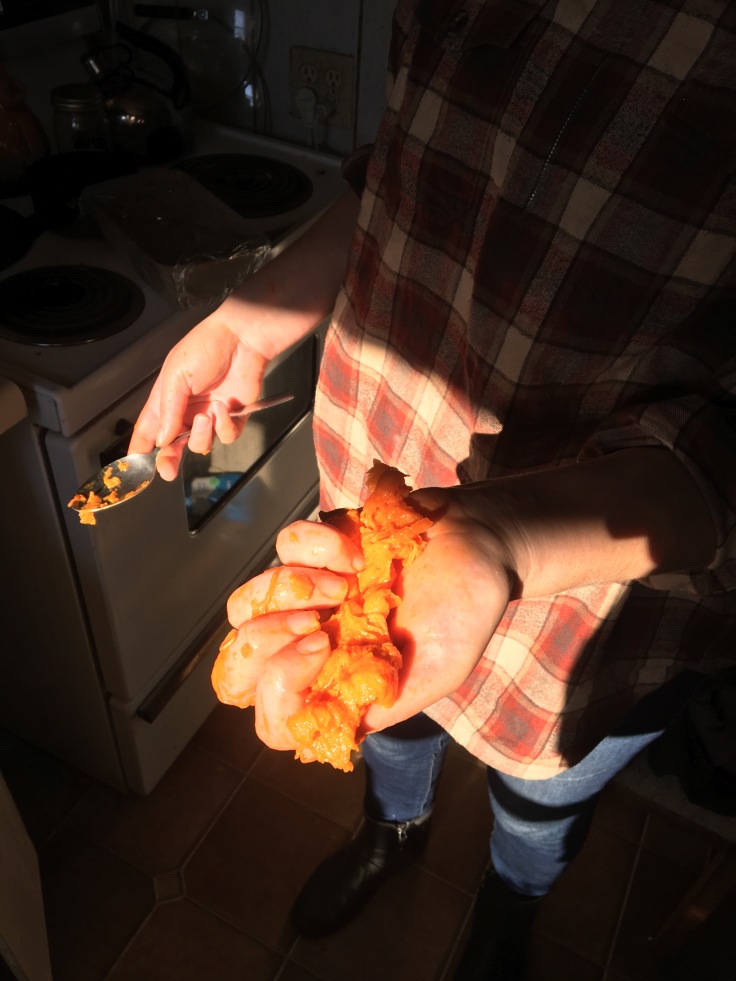 Is there anything more satisfying than gutting a pumpkin? I found this lovely heirloom baking pumpkin down at the grocery for only five dollars. That’s ridiculously affordable. It was a bit bigger than the pie pumpkin the recipe called for, so I added extra cheese because you can’t go wrong with cheese. 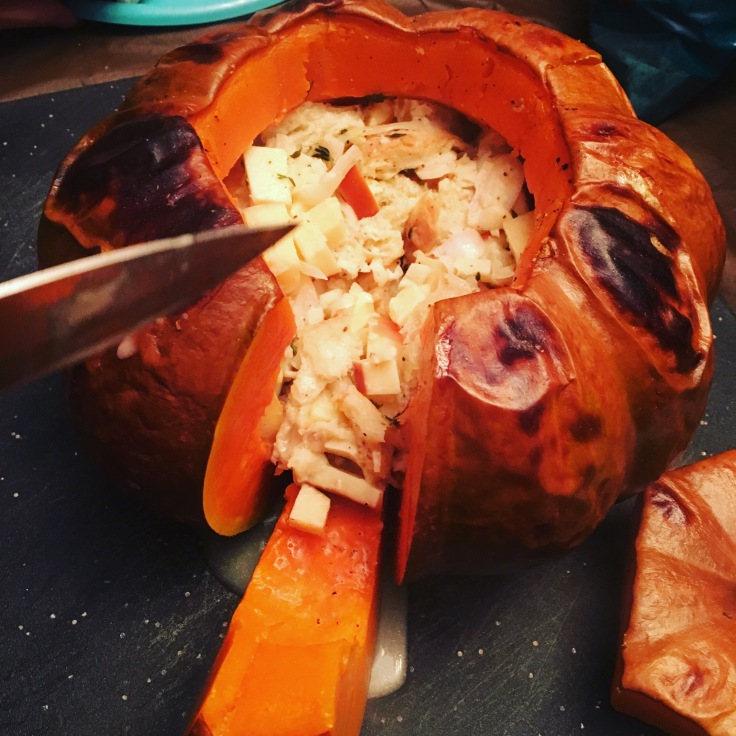 I’m a vegetarian. This recipe is not. But the only thing not-vegetarian in it is a tiny smattering of bacon, so I took that out and did a substitute for the gruyere. Smoked gouda brings that smoky umame flavor and then some. This is decadent and not for the faint of heart. You will eat it and you will be amazed. Plus it’s cute, because who doesn’t love a little stuffed pumpkin as your centerpiece for a delicious meal? Make this first, because it takes minimum an hour and a half to bake and you can always bake other things around it if your oven is big enough.

I made a peach pie based off of the Smitten Kitchen blog recipe, which is my literal favorite website for recipes that involve any kind of baked goods. It was pretty delicious, and also one of the prettier pies I’ve made recently, probably because my oven failed to burn the crust this time around. Thanks for being reasonable for once, oven! For this recipe I would definitely recommend putting a baking sheet under your pie pan to catch the falling peach juice and also running your vent or cracking a window. My smoke detector went off a few times (Thanks again, oven.)

Bonus photo of Steve with his Pecan Pie, a family recipe! The pecan pie was a bigger hit than my peach pie, I believe because there were two of them and people felt like they could safely avoid taking the last bite. Or maybe because peaches are a summer fruit. Or maybe because the S.O. was standing over the peach pie brandishing a fork in defense. Thanks for taking the pressure off, Steve!