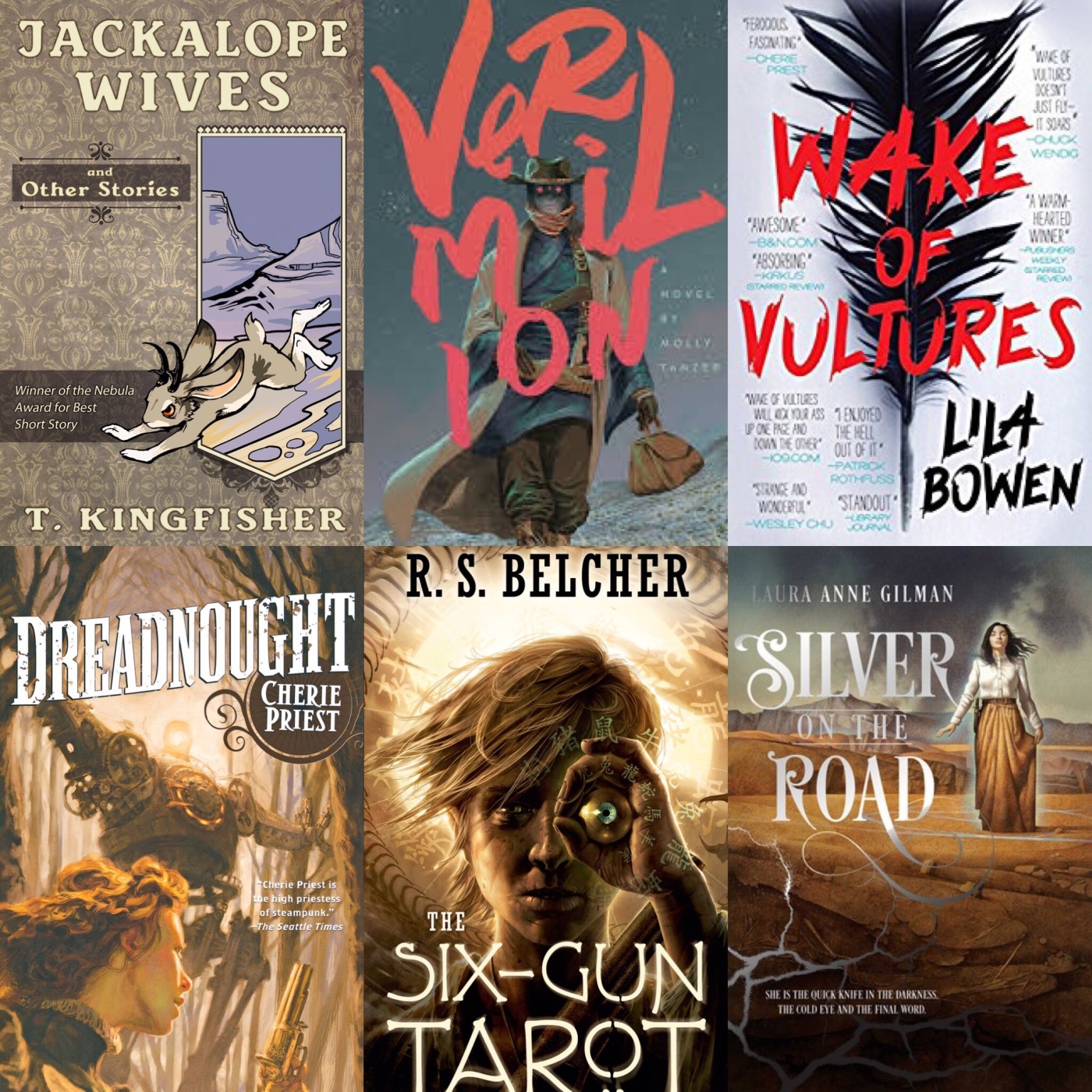 The Weird West as a fantasy subgenre is one that I’ve really been enjoying lately, and has cultivated a vibrant readership over the past few years. I’d say my first introduction to it was R.S. Belcher’s Golgotha books, but I have read a lot of other books in the same vein since then. This post collects some of those titles with a brief overview of the salient positives and negatives for each, spoiler-free.

I grew up for a good chunk of my childhood out west, in Arizona to be precise. I also grew up reading the Sackett books by Louis L’Amour. So reading these weird western titles is super nostalgic for me, but also constantly amazing. Somehow, it seems like this genre is the one providing some of the most innovative takes on sexuality, gender roles, and race – which honestly shouldn’t surprise me, given how rich the history of the territories was in the US both pre- and post-Civil War. So without further ado, in no particular order, I give you some of my favorites.

Silver on the Road, by Laura Anne Gilman

NPR described this book as “pure American myth” and I can think of no better description, honestly. This is my favorite of all these novels, starring the Left Hand of the Devil, Isobel, in a dreamy coming of age that sucks you down into a world that’s larger than life. Though Isobel is young and at times naive, this is not a young adult book – the themes are too large and too dark. Magic lives in the Devil’s West, and it sinks its claws in whether you like it or not. This is the true American frontier, the archetype of a time in our history that formed so much of our cultural identity. If you read no other book on this list, read this one.

The Six-Gun Tarot, by R.S. Belcher

Perhaps the best way for you to get hooked on this book is to read this handy excerpt from Tor.com. The first book in the Golgotha Series, this book draws on Mormon, Chinese, Native American, and esoteric Christian mythologies in a world tinged with steampunk. Maude Stapleton is my favorite character, and she has her own spinoff book later in the series that just came out this year which I haven’t had a chance to read yet. I’m very excited about it.

Dreadnought is a lovely little tale written by Cherie Priest, one of the big names in steampunk. This is in fact a steampunk book, one hundred percent. While I prefer her book Maplecroft, this book still is high on my list of her works. Maplecroft is set in New England, so it unfortunately doesn’t fit the theme here. Dreadnought, on the other hand, tells the story of a Civil War nurse traveling across the country, so it’s not solidly set in the West as it were. The frontier feeling of adventure remains, however, and it’s aided by trains and chemically induced zombification, so if you’re into those things I recommend this book highly.

Wake of Vultures, by Lila Bowen

This book is a lovely, introspective affair that spoke deeply to the little girl in me who wanted to be a boy. Basically, if you ever read the Song of the Lioness books and felt immeasurable kinship with Alanna, this book is for you. Unlike those books, however, Wake of Vultures also tackles race and sexuality, and takes the next step on the gender identity conversation that the Song of the Lioness either couldn’t or wouldn’t take. All of that is wrapped up in a wonderful odyssey to battle a terrifying monster or two.

Speaking of gender identity and race, don’t miss this lovely installation. Featuring Chinese heritage, talking bears, and a badass genderqueer female character, not to mention vampires, this book is a galloping romp. It sets itself up for a sequel as well, which I hope it follows up on.

Jackalope Wives and The Tomato Thief, by T. Kingfisher

This is an example of saving the best for last. Also I’ve cheated a bit by including both of these titles – there are technically two novelettes here, one of which won the Hugo this year! It’s worth it to read both in order, since they are so short. You can get these two stories along with several other lovely tales in the collection Jackalope Wives and Other Stories. Ursula Vernon, aka T. Kingfisher, is one of my all-time favorite authors at this point and a  source of inspiration. And the main character of these two tales is a lovely old woman. I love reading about old women doing badass things.