I went and saw Blade Runner last weekend and it was really, really good. Very loud, very bleak, but good. I definitely recommend watching the bridging shortfilms, though, for greater appreciation of some of the plot points.

This movie gave me a lot of thoughts. I debated on what to focus on in my analysis of it – the fancy way they sloughed off the old setting, for example, was impressive to me as a writer and moviegoer, and there’s a lot to unpack here about what is “real” and constructed memories. There’s also something to be said about the pacing, which was slow, ethereal, and felt like a horror movie at points (in a good way). There’s also some bad bits, like POC representation in the film, which I felt was not as solid as it could have been, and LGBTQ representation as well (alternate sexualities apparently don’t exist in Blade Runner). But, since mostly I write about women, I thought I’d go with that for this post, though I may come back to those things later.

To understand Blade Runner 2049, we have to also talk about Blade Runner the original, or, as we could call it, Blade Runner 2019. If you haven’t read it yet, I refer you to Sarah Gailey’s review of said movie’s Directors Cut, which made me immediately want to go watch that movie again. Honestly, if you are still reading and haven’t seen the film, or if you’re thinking about going to see it again, you should definitely read that review first.

The key point to take away from Blade Runner 2019, however, is that society, in addition to being unequal via enslaving a group of people based off of their origins, etc, is unequal in other ways. Women are largely sexualized and seen as objects in the original movie. This is in part fueled by the fact that most of the women on screen in the original film are replicants. They were created largely to fulfill men’s dreams and passions. Misogyny is not questioned in Blade Runner, per se. Women are beautiful, men are hardbitten, and the world goes on. 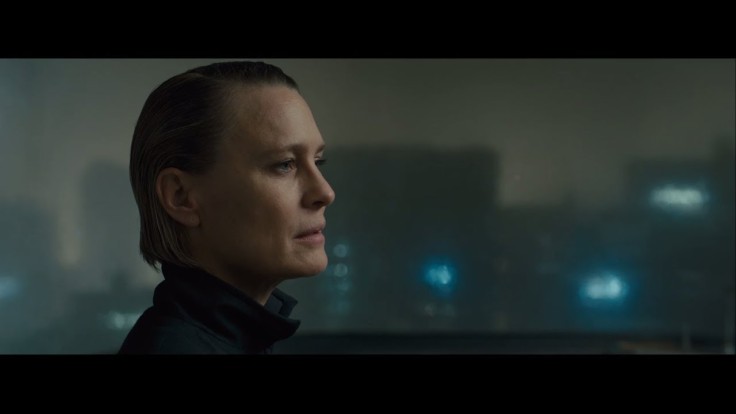 That situation holds in Blade Runner 2049, up to a point. There are, after all, no advertisements for male companion model projections, only females. Wallace, the new antagonist, also keeps a female assistant, Luv. Female sex workers feature prominently and sometimes questionably in the film. This is a world still firmly in the grips of misogyny and the male gaze. What is interesting about the film is that I would not, with a few exceptions, say that the film is particularly misogynistic for its kind. While it fails to pass the Bechdel test, in part, I think, because the protagonist is a man, the film does have near-equal named, speaking parts for men and women.

That equal representation is sorely lacking in most films of this nature, and was lacking in Blade Runner: 2019. Main characters with a great deal of power and/or importance to the plot or main character include Lieutenant Joshi, played by Robin Wright; Joi, played by Ana de Armas; Luv, played by Sylvia Hoeks; Freysa, played by Hiam Abass; and Mariette, played by Mackenzie Davis. That’s a long list, especially when, in contrast, there are Ryan Gosling, Harrison Ford, Jared Leto, and Dave Bautista.

Equal representation undercuts the ideas of misogyny. This is, after all, a movie about the future, but it is a dystopian future, so perhaps we cannot be too hard on it. That said, equal representation is not the only thing Blade Runner 2049 has going for it. The plot twist with Ryan Gosling’s K is solid commentary on the idea of male exceptionalism. As Freysa tells K, we all dream of being exceptional, there’s no crime to that. Given the evidence he was provided with by both society and those close to him, it’s no surprise that K would have developed the idea that he might be the savior of his kind. Yet when faced with the reality that he is not, in fact, the chosen one, K decides to make his life matter in a way that’s important to him. He rejects Freysa’s instructions, in the hopes of giving the person who has functionally destroyed his life a chance for one good memory. He props up a woman who just happens to have the fate he aspired to.

Really, there are only a couple of things that made me a little squeamish in the movie. The scene where Mariette is hired to be Joi’s body is one – it’s an interesting concept but I don’t know what it did for the plot, honestly. Joi herself is another – K is clinging to any kind of companionship, and there is a question about whether Joi is sentient or not that doesn’t seem to be fully explored. Luv’s killing of Joi seems almost a relief when it comes, yet lacks the drama I would have hoped for. K is very contained, but he almost seems resigned to this moment, and Joi as well. Joshi’s death is more meaningful, and her interactions with K are some of the most interesting. The movie has a high body count for its women (though yes, one of those bodies was a crushed Emanator) and that’s worth noting going in, even if most of the bodycount comes at Luv’s hands. Most of the men, in contrast, survive until the end.

In closing, I can’t say that the setting isn’t built on some troubling ideas, but I think the filmmakers did their best with what they had to work with, and they certainly did better than I expected. It wouldn’t get an A+ feminist rating, but showing women in a diversity of roles and situations, with solid characterization and good screentime, is more than most films in the genre accomplish. If you’re on the fence about watching, I would recommend it.

Want to support this blog? Please check out my Patreon.