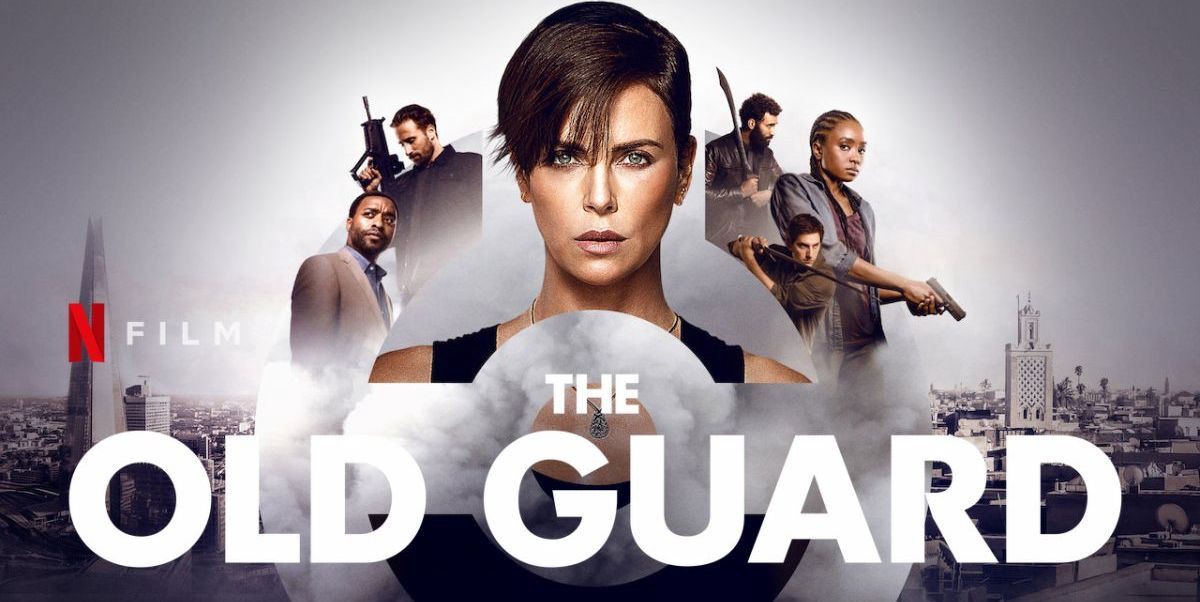 I finally watched The Old Guard and I’m here to talk to you about the subliminal themes of this fun movie, superheroes, and a concept I recently encountered when reading about another Charlize Theron movie, the Just Warrior.

While POP FIZZ is not currently happening, having those conversations has made me think about a lot of different concepts. One of our very early episodes touched on a book called Furious Feminisms, which is a collection of essays on Mad Max: Fury Road. I think it’s a bit difficult to talk about Theron in The Old Guard and not also talk about Mad Max. The burnt, bitter characters of Furiosa and Andy bear too much resemblance to one another not to be compared. Both are aggressively violent warriors, hyper-competent, and dealing with a lot of trauma centered around their femininity (Andy was burned at the stake for being a witch, Furiosa was presumably sexually assaulted). Both exist in very patriarchal spaces and find companionship with men who are too mentally unwell to be good, supportive partners or friends. Both have a very fraught relationship with the less damaged women in their lives.

There’s a lot to unpack here, is what I’m saying.

But what most intrigued me about The Old Guard was all of this packaged within a very religious thematic subtext, something not present in the film Fury Road. Here there be spoilers, friends, so click through if you want to or go watch the movie and come back.

Andy is disillusioned. She’s lived too long and died too many times to count. And this general exhaustion, this long, slow horror, is interrupted by the arrival of a new sister-in-arms, Nile. Nile, a young American soldier stationed in the Middle East, is killed and comes back to life. Only one of the other soldiers in her unit sees her die, so there’s enough confusion that she doesn’t at first realize what has happened. But soldiers talk. By the time Andy arrives to get her, Nile has been cast out by her peers as something unnatural, and is in danger of being taken as a subject for experiments by the US military. Andy saves her, though to Nile it feels like Andy uproots her. From the beginning the two women have an uneasy relationship. Nile still believes in rightness, in goodness. Andy has given up on people being good, but she desperately wants to believe her suffering has meaning.

The film gives us that meaning in the form of Copley’s theories. When Andy is captured and experimented on herself, in danger of her final death, Nile finds Copley and threatens him to tell her where Andy is. Copley confesses that he has been tracking Andy and the other members of the Old Guard for a long time — and tells Nile his theory. The Old Guard are something akin to angels. The reason that their immortality comes on them suddenly and leaves them at no whim they can understand is because it is divine in origin — not meant to be understood at all, but approached through faith. He offers as proof all of the people that Andy and her company have saved over the long years — and the good works those people have done. Nile embraces this theory as an answer to her questions, and eventually Andy cautiously acknowledges it, seeming to find some peace in the idea of a meaning to her suffering, even if she’s not so sure about God.

I, personally, had some questions. Why would an immortal, god-touched being be a warrior? Why was this the highest ideal? The flippant response, of course, is that this is an action movie, but someone wrote this movie and it speaks to some general cultural understandings many Americans share, so what is it about the idea of a God-touched warrior that is so easy to swallow? Why not a God-touched gardener? A midwife? A healer? Immediately, I recalled the concept of the Just Warrior as described in Furious Feminisms.

To summarize, the Just Warrior is the man who goes off to battle and returns home. In “Just a Warrior at the End of the World” Barbara Gurr outlines how Furiosa comes to embody this masculine stereotype, and example of women seeing expanding roles in their gender, but how the men in the narrative are not allowed a converse expansion of acceptable gender roles. It’s a really great read, and you can hear me talk about it in one of the early POP FIZZ episodes.

We've been quiet since September of last year, but we're not gone forever. We're planning a season 2, so stay posted!

We have an underlying idea in our society that it’s possible to be a Just Warrior, and I think this bears interrogating. As women explore the constructs of gender and how we can move in differently gendered spaces, it’s easy to assume that traditionally masculine gender roles and activities such as the killing of others have suddenly become less problematic because they’re not solely reserved for men anymore. This is just one human’s opinion, but I really feel that’s not the case. And while I love action movies, I hope we can explore the nuance of what it means to be a hero in stories and what it means to do what you have to and how those two things can be very different.