Friends, I have just finished The Calculating Stars, and it blew me away. I would compare this book most closely in voice and style to A Natural History of Dragons, but with a depth of urgency that, for all my love of Brennan’s work, exceeds that series. Buckle up, my friends. This is going to be a long ride.

Mary Robinette-Kowal’s approach to writing is research intensive, and she is good at what she does. The science in this book is rigorous, the history excellent, and the deviations believable. Those familiar with her work may also be familiar with Writing Excuses, which I have previously discussed here. I admire her utterly as a writer and several times in the course of reading this book had to put it down to exclaim at some subtle turn or decision she had made, some expert bit of technique. For those unfamiliar, you might consider reading Ghost Talkers as an introductory text and listening to the accompanying Writing Excuses episode where she and her peers analyze her writing decisions in that text. More recently, I had the pleasure of listening to her lecture on the MICE quotient at Futurescapes 2018.

To begin my reading of this book, you first have to know about the novelette which started Mary Robinette-Kowal’s work in this world, The Lady Astronaut of Mars. You can find that story here. I first read it several years ago, and re-read it sometime last week, whereupon I sobbed like a baby. The Lady Astronaut of Mars is a story about a woman caught between duty and the stars, and it is tricky and full of grief and loss and letting go and peace and hope. It is the story of Elma York and her husband Nathaniel coming face to face with death on the red planet of Mars in a way that is so mundane as to undo you. 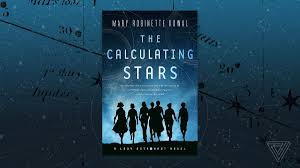 The Calculating Stars does no less. It is no less, though the characters in it are far younger and it would have been easy to lose some of the urgency and poignancy of the novelette. This is a story in the vein of Bradbury in subject if not in style, a story of the love of space. But it’s also a story about politics, about the tough choices of leaders and the cowardice that arises, about hatred and apathy and compassion and hope. It’s the story of a comet that comes down from the sky and shatters a world. It’s the story of a woman, Elma, who wants, more than anything, to reach the stars, even with everyone telling her there is no place for her there. It’s the story of the support she receives, and the losses that lead her to strive ever higher. Everyone in it is utterly human, and it’s a masterwork, deftly tying in subtle references to the original novelette without ever requiring it as a reference.

One of the most surprising and delightful things about this novel was the way that Robinette-Kowal resisted erasing the very real struggles of other marginalized groups besides woman in this story. It would have been easy, and probably expected, to use the excuse of a meteorite striking the United States as an excuse to erase the struggles of the Civil Rights movement. While this does not take front seat in all of the plot conflicts, the struggles of black Americans and other people of color are certainly not ignored in the text. Elma, the main character, is conscious of her privilege and the injustices going on around her. She is not always a perfect ally, but she does try to be an ally despite that. She apologizes when she makes a wrong step, and she tries to do better. Robinette-Kowal’s decision to engage with these issues directly in the text instead of sidelining them was something that I as a writer hope I can learn from in the future.

What results from all of these elements is a world that lives and breathes, a world that feels both familiar and tragically changed. And it lives so well because of its characters, most especially the complicated, flawed, brilliant Dr. Elma York, who is determined, who fails, and who persists not only for others, but for herself. She is human, in the way that the best and worst of us are. Her selfishness is refreshing in a world where strength is often seen as selfless for women – Dr. Elma York walks a hard, often impossible line between what she wants for herself and her duties to others, one that is tempered or exacerbated by compassion, rage, and fear by turns. We grapple with her, with our own internalized mores, and with our own losses. To read this book is to grow alongside Elma as she reaches for the stars.

Do you want more content like this? Please consider supporting my Patreon or dropping a donation in my Paypal.